If you are looking for daily (and do-able!) Elf on the Shelf inspiration, you have come to the right place!

As we explore the best Elf of the Shelf ideas for 2020 (and let’s face it– we could all do with some extra cheer this year!), our tried & tested guide will give busy parents easy ways to bring your Elf on the Shelf to life- putting them in cheeky situations which are bound to bring big smiles (and as little mess as possible!) throughout December. 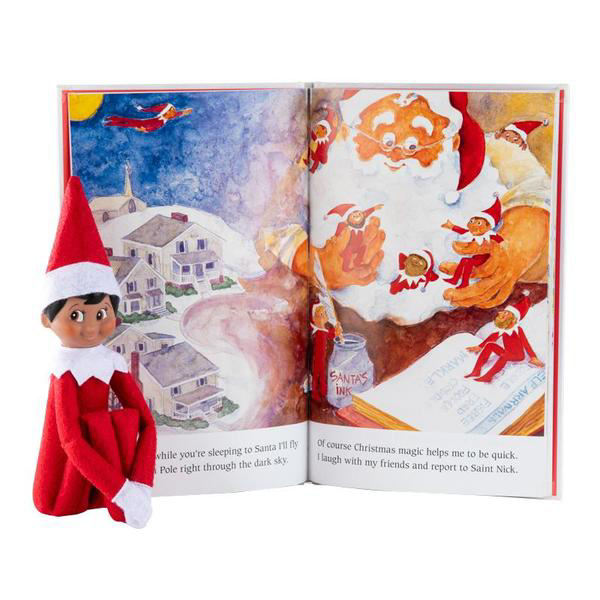 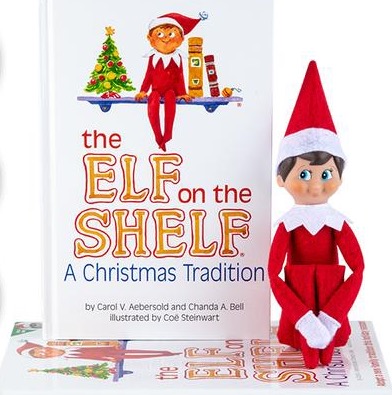 Before we reveal our 2020 Elf on the Shelf guide, if you are wondering how this Christmas tradition first started, the tale begins in America…
Each year ‘Fisbee’ the Scout Elf would appear in the Aebersold’s house in the lead up to Christmas- sent by Santa, from the North Pole, to keep an eye on the Aebersold children’s behaviour.
Determining who would make the naughty or nice list, Fisbee would silently watch over the children, flying home each night, to report findings back to the big man himself!
Remaining a silent observer by-day (and not to be touched- or else his magic would disappear), this mischievous Scout Elf would be discovered in a new hiding place every morning… more often than not, in some sticky situations! Deciding to share their tradition with the world, the Aebersold’s published  ‘The Elf on the Shelf: A Christmas Tradition’ in 2005; which has since gone on to become the phenomenon it is today - loved (and sometimes cursed) by households across the globe!

24 DAYS OF ELF ON THE SHELF INSPIRATION

So… where to start with your Elf on the Shelf?!
Legend has it that your Scout Elf will only come to life once they have been named! When your Elf appears, it’s a great start to accompany your festive helper with a note to introduce themselves. For a guaranteed crowd-pleaser, we highly recommend the introduction for your Elf on the Shelf be made in chocolate... first impressions count after all! Click here for our Personalised Chocolate Photo Gifts, where you can add a picture of your Elf alongside a note and tasty introductory message!
Onwards, to our quick & easy Elf on the Shelf hiding places with a round-up of some naughty & nice ideas…

DAY 1: Bringing the North Pole back to your home, you discover your Elf making snow angels (on a flour-dusted surface)! 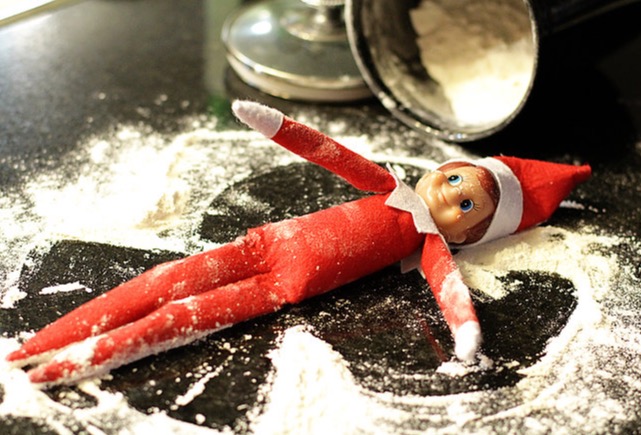 THE FLOOR IS LAVA
DAY 2: Watch your kids hop in happiness this morning, as you wake to a ‘The floor is lava’ sign stuck on your kitchen cupboards & your Elf perching on a counter or cupboard

DAY 3: Your family photos have been de-faced with whiteboard markers, and you now all have beards and Christmas hats on!

DAY 4: Your Elf has gone rogue in your fruit bowl, drawing funny faces on your bananas and caught red-handed with the sharpie 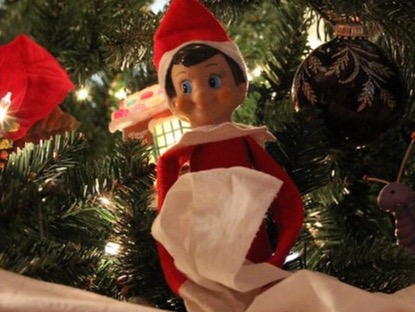 NOT THE TOILET ROLL!

DAY 5: Your Scout Elf has taken to the tree, papering it in toilet roll and getting a little ‘caught-up’ in the process

HAS HULK BEEN HERE?!

DAY 6: Phew – Your Elf has been up to tricks again, putting green food colouring down the toilet!

DAY 7: Taking travels to a new extreme, your Scout Elf has crafted himself a tinfoil astronaut suit and is ready to for lift off on a toy aeroplane!

DAY 8: Clearly exhausted, you find your Elf asleep on the computer, drafting an email to Santa explaining that he was too tired to make the journey that night!

DAY 9: Teaming up with all the other miniature toys in the house, your front room has been turned into a poker den, with your Elf holding all the cards! 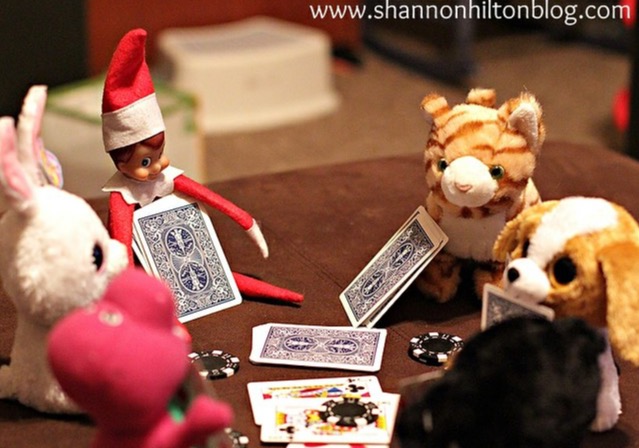 DAY 10: Nope, suspended from the ceiling, your Elf has created their very own zip-wire!

DAY 11: Checking your reflection will be a bit trickier today, as shaving foam has covered the mirror & ‘ho ho ho’ has been traced out with little fingers!

DAY 12: Buckled in and ready to go, your Elf is patiently waiting for you in the car, wondering what the hold up is! 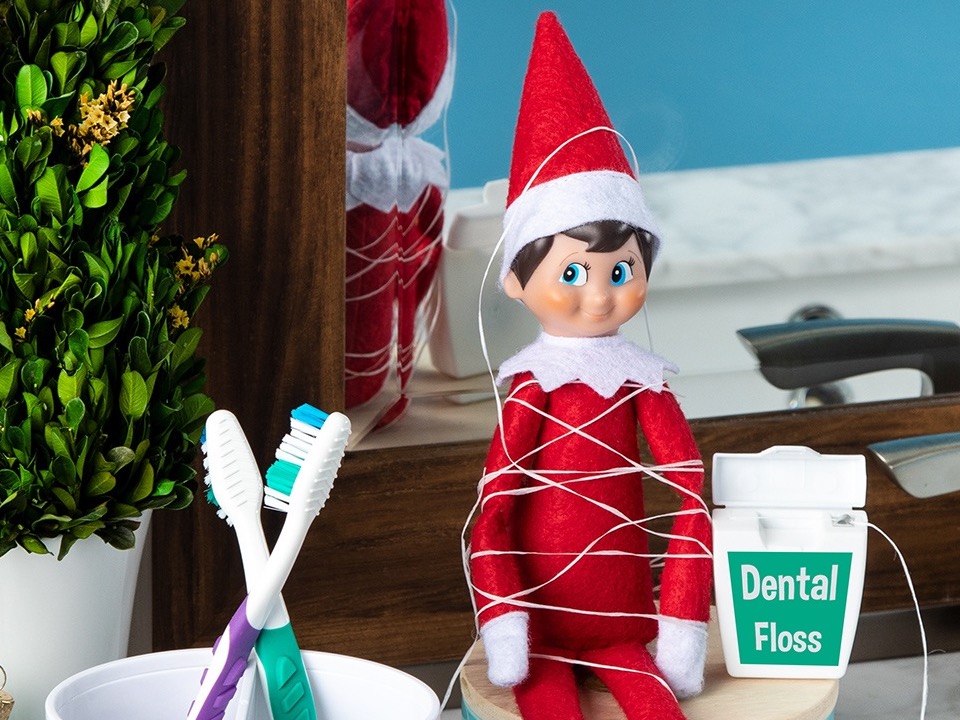 IS THIS HOW YOU FLOSS?

DAY 13: As our little ones have flailed around 'flossing' for the past year, someone has been taking note, but hasn't quite perfected the moves! Wrapped up in dental floss, you find your Elf in the bathroom a little tied up!

HOPE YOU'RE NOT IN A HURRY?!

DAY 14: Putting your shoes on proves a bit tricky this morning as your Elf has been at the clingfilm

A STAR IN THE MAKING

DAY 15: Seeking the limelight, you wake up to discover your Elf has taken the hot seat at the top of your Christmas tree, demoting the fairy to take a place alongside the baubles

DAY 16: You discover a tower of cans with your Scout Elf on top, reaching for the biscuit tin

DAY 17: Ready to start the day you are greeted by a 3D cereal packet! Not only has your Elf managed to get into the cereal, they seem to have replaced it with popcorn instead! 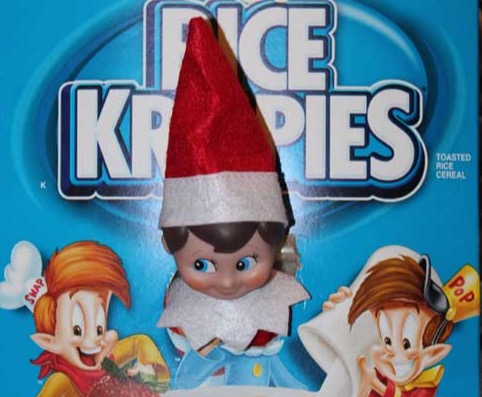 DAY 18: Busted – your Elf has been toasting mini marshmallows on a toothpick over a tea-light (unlit of course!) taking a little camping break in the lead-up to the big day!

DAY 19: After a long journey returning from the North Pole, you find your Elf taking a (cotton wool) bath in the sink to relax

DAY 20: For a naughty midweek treat, your Elf seems to have replaced your regular eggs with Kinder Eggs

SELFIE FOR YOUR ELFIE?

DAY 21: Not able to unlock your phone, your Elf has taken to creating an old-school 'elf'- painting a life-sized picture of himself!

DAY 22: After another busy journey to the North Pole and back, your Elf has tucked himself up in bed next to a very clear (and tiny) Do Not Disturb sign!

A STAR IN THE MAKING

DAY 23: Trying to pack up before his imminent return to the North Pole, you find your Elf in the washing machine, alongside a ‘Help Me’ note stuck inside the door!

After a month of causing mischief, it is time for your Scout Elf to go an hibernate! Like their entrance, why not leave a lasting impression with a chocolate farewell, revealing whether your children have made the naughty or nice list with a Personalised Chocolate Letter? 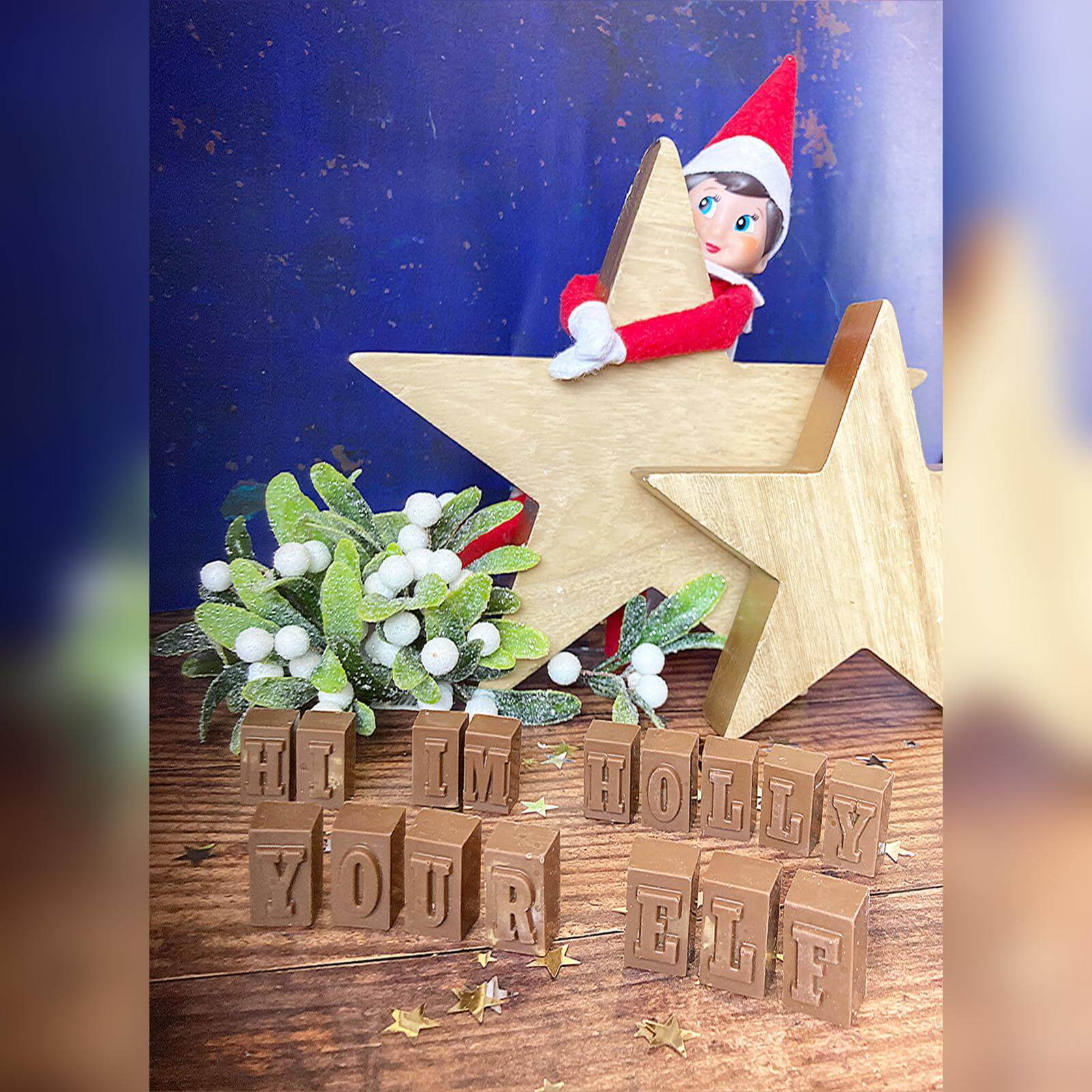 We have had fun just thinking about these Elf on the Shelf ideas, and hope you find some inspiration ready for your new arrival to appear this year!

For lots more elf-spiration, Pinterest is a great source of ideas. Don't forget to tag us on Facebook or Instagram to let us know what your Elf has been up to!

Here's to a happy and healthy December,

From the Morse Toad Team!

Morse Toad takes your words, turns them into delicious chocolate, and delivers them to whoever you like. Why? Because greeting cards taste terrible. Our mission is to revolutionise how we send messages. With digital communication being fast but forgettable, and cards being thoughtful but slow and unexciting, we aim to strike a balance by providing a service that is as quick as digital, and infinitely more memorable and delicious than a card.

You have no items in your cart